Doha, Qatar | BIRD AGENCY |  The focus today shifts to Group G and H, where Ghana’s Black Stars will start their campaign against Portugal at the Lusail Stadium while Cameroon’s Indomitable Lions will take on Switzerland at the Al Janoub Stadium.

World Cup pedigree: This is Ghana’s fourth World Cup after making their debut in 2006 and competing again at the 2010 and 2014 tournaments.

Best performance: The Black Stars reached the quarter-final of the 2010 edition in South Africa. It ended heartbreakingly when Asamoah Gyan missed an extra-time penalty that could have seen them become the first African team to reach the semi-final.

Starman: Thomas Partey -So vital to Ghana’s chances of a successful World Cup, the Arsenal star is a Rolls Royce of a midfielder capable of doing it all. Traditionally a defensive midfielder, the 29-year-old is the man that dictates the tempo of the game while protecting the defence. His passing range is super, while he combines defensive skills with driving runs forward.

Coach: Otto Addo -The German-born Ghanaian coach took over on an interim basis in March, just before the World Cup playoffs against Nigeria. After sealing the qualification, he was handed an extended stay. The 47-year-old, who also doubled up as an assistant coach at Borussia Dortmund, is not new to the grand stage as he was part of the Ghana squad at the 2006 World Cup.

Squad: Ghana’s problem has been transitioning from a team of stars into a star team since they can impress and disappoint in equal measure. Apart from Partey, there are also new additions to the squad, such as Denis Odoi (Club Brugge), Tariq Lamptey (Brighton) and Inaki Williams (Athletic Bilbao), who switched allegiance just in time for the World Cup. Add Mohammed Salisu (Southampton), Mohammed Kudus (Ajax Amsterdam), the Ayew brothers of Andre and Jordan, and Ghana look well stocked.

The player to watch is Mohammed Kudus -Everything good in attack from Ghana will revolve around the 22- year-old, who can either play as a playmaker behind the striker or as a false nine. He has shown excellence in creating chances and converting them, having already netted ten goals for Ajax this season.

Best performance: Cameroon’s best run came in the 1990 edition in Italy when they reached the quarter-final before losing to England after claiming major scalps on the way, including Argentina and Colombia. Since then, they have only won once (in 2002 against Saudi Arabia).

Star man: Eric Maxim Choupo-Moting -The Bayern Munich star has come to Qatar as one of the hottest strikers in the world, having scored 11 goals in his last ten games. The 33-year-old German-born forward will be the poster boy for Cameroon in Qatar, seeking to add to his 19 goals for the five-time African champions.

Coach: Rigobert Song – The former Indomitable Lions captain was handed the reigns in January 2022 with his appointment order from the country’s President Paul Biya. Though his critics say he lacks the tactical acumen to compete with the best in Qatar, the former defender can summon on his vast experience, which includes playing at four World Cups and is his country’s most-capped player with 137 goals.

Special record: Legendary striker Roger Milla became the oldest player ever to appear in a World Cup when he featured in the 1994 tournament aged 42 and managed to score. However, the record for the oldest player was broken in 2014 by Colombian goalkeeper Faryd Mondragon, but Milla is still the oldest goal scorer at the World Cup.

New kid on the block: Bretford striker Mbeumo, who is of Cameroonian descent, switched allegiance from France to Cameroon in August, just three months before the World Cup, and has since earned three caps for the Indomitable Lions.

The post Who is who in Ghana, Cameroon squads? appeared first on The Independent Uganda:. 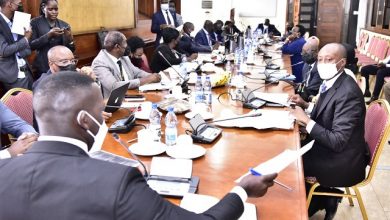 MP on the spot over purchase of Nsambya railway land